Vogalonga: Why Venetians do it standing up 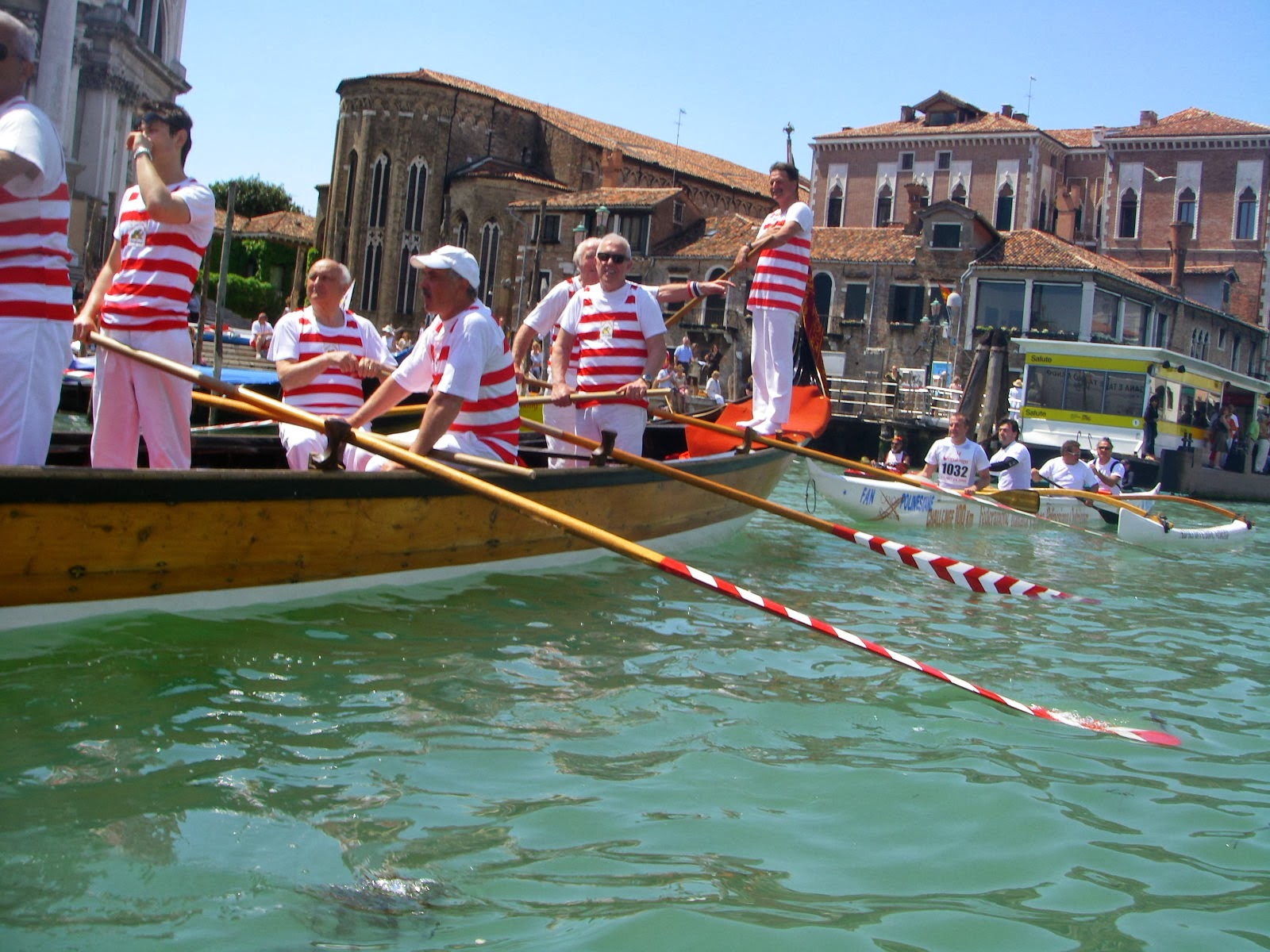 The Vogalonga is a priceless opportunity to row round the Venice lagoon, passing through the islands of Murano and Burano before making triumphant progress down the Grand Canal itself, and finishing outside St Mark's Square.

Participants take to the water in what's probably the widest variety of different, oar-powered craft you'll ever see in one place, mostly flamoyantly dressed, and as determined to have good time as they are to take on the 30km rowing challenge.

There were just so many reasons why we kept saying "Oo, look at that one!"...

Distance: 30km
Time: About 4hrs - it isn't a race!
Boat type: We were in a wide 4+, but any human-powered boat will do
Number of crews in the event: Hundreds
Event Organiser: www.vogalonga.com

What does Vogalonga mean?
Literally, "long row". Voga=row and longa=long, not surprisingly.

While you're at it, "Vog" rhymes with "dog" not "Vogue". Never try to sound posh when speaking Italian as you will have got the vowels wrong (and while I'm at it, "Latte" rhymes with "paté" not "Art A"). Thanks for letting me get that one off my chest.

A bit of background, including "forcole"
When you think of rowing in Venice, most of us, myself included, think of the expensive, black tourist gondolas, and that's it. But when you think about it, what WOULD the average Venetian do as a sport? Not many facilities for football, hard to train for a marathon when you're turning corners every 20m and falling over tourists every 10m, and race cycling is clearly right out. So it's actually quite logical that Venice has a number of rowing clubs, all tucked away off the tourist track a little.


But when I say rowing, it's not as we think of it, Jim. For starters, they often don't sit down. And they face forward. Why? Well, the islands of Venice - the main one, the Lido and the outlying islands of Murano, Burano and Torcello - stand in a lagoon. A shallow lagoon. There are various dredged channels through this that allow function as roads for the motor boats, but you could stand up in most of the square meterage of water out there. However, there are plenty of rocks strewn around this area, so if you're standing up and facing forwards as you row, you can see these and avoid them.

Which is a lot better than putting a hole in your Empacher single.


Not only do you not get to sit down in Venetian rowing, you also don't have a button to lock your blade onto the gate - and to make matters even worse, the "gate" is a rather open-plan affair, and is basically a half-circle carved out of a wooden post called a "focola". Focole often have more than one carving in them - enabling a gear change, which is a natty idea. I think I saw some, though there isn't an example here, where there was a carving on the back of the focola - for backing down.

About the event
The Vogalonga is not a race. Prizes ARE presented but only to crew numbers randomly drawn out of a hat afterwards. And everyone gets a little medal and a poster.

Rather, it's a celebration of unpowered rowing in a city where the many commercial motorboats - "vaparetto" water buses, and the elegant but expensive water taxis - throw up a heck of a lot of wash. As a result, any human-powered craft is welcome in the Vogalonga, and this ranges from 1-man plastic kayaks, to the most extraordinary and unique boats, some involving large number of standing-up oarspersons.

There were also dragon boats, outriggers, a Finnish chuchboat, and many, many I didn't begin to recognise.

What to wear?
As far as we could tell, the formal kit for a Venetian rower is white trousers, a horizontally striped top, and a matching sash round the waist. Which was obviously all fine until ladies started rowing. Now, your average Italian donna can get away with skin-tight white jeans, or even hotpants in a way that we Brits, with our Anglo-Saxon skin, can't even dream of. But despite apparently embracing female members of the club (not literally, doubtless some of that goes on too, but that's not the point here), it appears that certain traditions have to be observed, so lady rowers wear short white SKIRTS. Most of these appeared to be tennis skirts,  although I saw one lady who appeared to have been unable to get to her local branch of Lillywhites before the event, and had resorted to rowing in her petticoat. Well, it was short and white. Although it also had lace round the edge.


And what not to say to a gondola-builder
Our team of nine were fortunate to have arranged to borrow a sliding seat, offset coxed four from a tiny rowing-more-as-we-know-it club out on the Lido. It was a bit battered, but ran nicely, although the undercarriage on one seat broke as we were rowing it across to the start area the day before the event. Fortunately, the place where the boats were being stored overnight was next to a gondola-builder's workshop, so I approached the master craftsman within, brandishing a 30-year old, broken rowing seat at a man who makes utterly exquisite craft, that sell for up  to E30,000 a piece, and asked him if he could help us. After considerable sighing, some glue and some clamps were produced. It was rather like Fabergé if he could just slop some paint over a hard boiled egg. But we were back in business.


Out on the water
With nine in our team and only five seats in the boat, I was in "crew 2", and we caught the vaparetto out to the tiny island of Burano, which was roughly the half way point, with the aim of finding somewhere we could swap over with "crew 1". We quickly identified an ideal spot along the main canal that runs through the centre of the island. A large barge was moored there, with a group of French people aboard, who were preparing mounds of sandwiches, and unpacking boxes and boxes of chicken drumsticks. As the first crews approached, they would easy, and call up their food - and drink - order. "Du vin rouge? Certainement!" "Des sandwiches?" Bien sûr!". The French would then load the victuals onto a round metal bar tray, mounted on a long pole, and pass the order out to the crew.

Compared with the "no alcohol/early night" discipline of regatta and head racing, I'd been fairly amazed at the cocktail party laid on by the organisers of the Tour du Léman the night before the race, but drinks DURING the main event - this was truly continental.

Anyway, we hopped into the boat, and headed out from Burano, further across the lagoon, and then through the canal on Murano, the glass-blowing island. Then we were back into open water again, overtaking smaller craft, and being overtaken by larger ones, all of them fascinating to look at.
Finally, we turned into the main bulk Venice, entering a canal in the North where both banks were lined by cheering crowds. We soon turned into the Grand Canal itself, and lapped up the incredible experience of rowing under the Rialto.

The event ends in a complete frenzy with well over a thousand small boats gathering in St Mark's basin, where it was incredibly choppy - whilst the man-powered craft might not cause much wash, a stiff breeze, and a massive cruise liner than had come in to berth (I think they've stopped that now) made it all pretty rocky.


Which, of course, meant that conditions were not ideal for the obligatory salute that boats make on finishing, which is called the "alta remi" or "high oars" - you take your blade out of the gate and hold it vertical. All of you. At the same time. And in our case, VERY briefly.


Unmissable
The logistics involved in the Vogalonga a are fearsome for Brits - it's a long way to drive with a boat trailer, and even then, you need a character-ful boat to do it in, or you'll just feel like you've somehow got into the Stewards' enclosure at Henley wearing jeans. It would detract from the experience.

But if you can overcome these, you will be rewarded with a spectacle like you have never imagined, filled with craft, costumes and colour, good humour, numerous languages, and supportive crowds. YOU will be part of the Venice that the tourists have come to see.

But do try to avoid being photographed in your petticoat...

Posted by Expedition Rower at 12:38