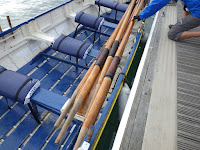 Today I was lucky enough to be taken out for a "taster session" in a Cornish Pilot Gig (in Hampshire, but you can eat Cornish Pasties there, so why not?).

On hearing that I was a river rower/skiffer, the coach immediately told me that "This is completely different", and it turned out that he was right, in several ways. Here's what I learned...

Nowadays, this is all very organised with pilots formally associated with each port, and the putting aboard of on on incoming ships arranged by radio. But back in the days when big ships had sails, and small boats were powered by oars, it was a free market, and the first pilot that reach the ship got the job. Which is why pilots paid good money to be taken out by the fastest gig. So early gig races were serious, professional affairs, and probably meant the difference between the rowers' family getting fed that evening or not.

A bit of geography second
For the benefit of non-UK readers, or exceptionally geographically challenged Brits, Cornwall is the long bit that sticks out on the bottom left of the UK. It's the first bit of England you come to after you've crossed the Atlantic or come up from the Bay of Biscay, so a lot of big ships used to come in there, which is why they have a big pilot gig racing tradition.

Langstone Cutters Gig Club, with whom I rowed, are considerably further east along the South Coast of England, in Hampshire, but Cornish Pilot Gig racing is a popular and growing sport, and it's nice that the gig love is being spread.

What's different?
These are the personal observations of a fine boat river rower/Thames skiffer, and do not pretend to constitute expert opinion on the sport of gig rowing, but they should be helpful starting points for others like me who ever venture out in a gig.

Posted by Expedition Rower at 20:19