If Disney did rivers: skiffing the Severn and Avon: 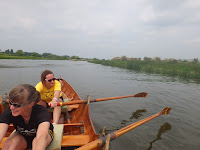 If Disney were setting out to create the perfect river, they would surely use the Severn and its dainty sister the Avon, as a model.

On a two-day skiff tour there, we found exquisitely pretty river banks lined with cow parsley and some kind of yellow flower (I’m a rower not a botanist, OK), quintessentially English church towers and fields of unicorns. Frankly, it’s amazing we weren’t surrounded by rainbow bubbles… oh, wait, we were…

About those unicorns
You’d probably like this one cleared up before we start, which is fair enough. Well, the thing about being immersed in a perfect land complete with little butterflies, is that you start expecting magic wherever you look. So when we saw some ivory-cream horses in a flower meadow, gently tossing their flowing manes, and snorting rainbows from their nostrils (we may just have had too many sugary snacks at that point), the mere detail that they didn’t have any horns didn’t seem to matter.

Route: Worcester to Pershore (Day 1), then on to Stratford upon Avon (Day 2)
Distance: About 30 miles each day.
Locks: 17 (4 on Day 1 and 13 on Day 2).
Diamond-shaped locks: 1 (Wyre Lock. We have no idea why: it made a change, but took longer to fill because of the greater volume, and mooring a long narrow boat in it might have been interesting.)

I have say that the relentless charm of the Severn and Avon can become almost too much of a good thing after a couple of days. I don't know about you, but if I were in a chocolate factory, I'd start wishing for a pickled onion after a while, and after the umpteenth mile of confectionery-style countryside, even a hint of brutalism might give you some contrast to help you you appreciate it all the better.

And the samey-ness makes it a bit like being plonked in a Monet for the weekend: it's lovely, but nothing HAPPENS.

That said, I thoroughly recommend the Severn and Avon as a rowing tour destination, and if you go and do it, and here are some top tips and fab facts to help you live happily ever after.

And finally, those rainbow bubbles...
I've been rowing for nearly 30 years, but I can safely say I've never been involved in rowing-generated bubble creation. Could this start a trend?

Posted by Expedition Rower at 10:25