How to do the Tour du Leman

One of the many reasons why this 160km race round Lake Geneva is totally, utterly my favourite rowing event (and why I keep going back) is that the organisers are so lovely, particularly to British crews who need help with hiring boats and lifts from the airport (unlike the continentals who turn up with trailers and their own cars).

One good turn deserves another, though, and so over the years I've been the person they refer new English-speaking entries to for advice. I'm happy to help, but to save me retyping the same answers every time, here's my "How to" guide for Brits with no experience of long-distance rowing (unlike the aforementioned continentals, most of whom do several 50k+ rowing marathons a year).

I'm usually asked for "tips" but in my view, the learned-the-hard-way advice below is much, much more than mere "tips".

Before you carry on to the TdL-specific points below I would recommend you read: 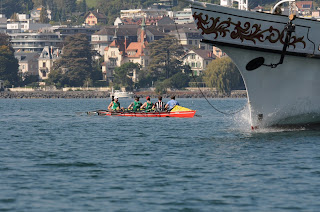 Or just use a lot of strips of duck tape.

You know how the race entry fee says it includes accommodation in dormitories "in the shelters of the civil defence"? What this means is the local nuclear bunker. Whether or not it's still true that there's a bunker bed for every Swiss citizen I don't know, but I'm pretty sure it was back in the 1970s, with the result that there are underground dormitories all over the country, featuring decor of the period (think orange and lime green with round-cornered geometrical patterns), which are used for various community events. The bunker is about 10-15 mins walk from the club up quite a steep hill.

And yes, it's underground. As in, with no windows. The claustrophobic are warned. 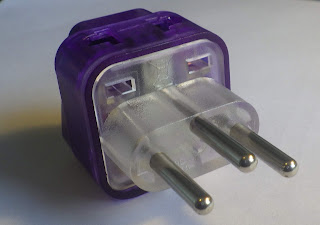 Eating out in Switzerland is expensive, and there are no shops near the club. After several years of paying too much for the wrong food which took too long and required too much of a walk to get to, I strongly advocate taking all your own food (or buying it from the supermarket at the airport but there's no guarantee you'll be able to get what you want). There are basic cooking facilities in the dormitories (a 4-ring cooker, fridge and sink) but take a kettle and saucepan (and plates/mug and a tea towel). We cook fresh pasta, add cold sauce, and have instant porridge for breakfast. See why I keep banging on about needing hold baggage? Buy milk and a bag of salad at the airport. Prepare to be astonished by the variety of food the continentals bring with them - who knew that a cheese board could be on the "What to take" list for a rowing marathon?

What training do you do on the water/ergo?

I usually do 3x6k on the ergo (with a couple of minutes rest in between each), and also just reasonably long outings on the water. The trick is to do rate 24 and not pull TOO hard. If you rate much lower than that in a touring boat it’s just heavy, if you rate higher you wear yourselves out and the boat doesn’t go much faster.

If you haven’t done the Boston Marathon already, do so (unless it's the week before the TdL in which case don't because there isn't enough time to recover). I would also recommend that you and your crew find a touring boat to rent (if your club doesn’t have one) and try to do at least a 2.5 hour row. You'll probably finish that thinking "How on earth am I going to manage to do that another 5 times?" There are several answers to that:

1) Even subconsciously, you always pace yourself for whatever you're doing.
2) Provided you stick to the Rules of Expedition Rowing (Rule 1: "Eat"), it doesn't actually get any worse after the first five hours until about the last five hours.
3) That's because you didn't eat while other people were swapping with the cox.


What did you wear?

Shorts are preferable to an all-in one, especially if you're a woman because they're much easier to pull up again when they're damp and sweaty after you've answered a call of nature (see below).

Check that your sports bra doesn't rub after a long outing: it's definitely a thing that one which is fine for a normal training session will bite after about 2 hours. If in doubt, go soft. Beware decorative stitching. Ditto any shorts or leggings with grippy rubber bottoms.

Consider waterproof socks if the forecast is inclement.

There is neither a need nor an observed practice that everyone in the crew matches.


How long did it take you?

My best time was 14.29. This was on my sixth Tour (and in a women's crew). My slowest was 16.25 in a mixed crew, on my first tour. Experience really counts. (On the first one we rated too low for too long, faffed, and took too much water with us, but we really just weren't used enough to long-distance rowing, despite three of us having done the Boston Marathon.)

For several years recently there has been a women's crew which has taken over 19 hours (who didn't make the cutoff points but were allowed to continue anyway). I would hate to be out there that long.


How often did you swap over?

Like I said, every 30 minutes. And no, it's not a good idea to take a small cox and stop every 3 hours for a 15 minute break.


Which pump would you recommend for us to purchase in the UK?

The list of "materiel" you are required to have with you (and this is scrutineered just before you boat) specifies "a bailer and/or a pump". The year we sank, when only 5 crews finished from the 23 crews which started, we had a hand pump which proved inadequate, but I don't think the organisers would let the race run in those kinds of conditions again, so I'm not convinced that an electric pump is really necessary. The Germans often bring neat little ones they've made ("vorsprung durch technik" and all that) which are powered by motorbike starter batteries, but you can't get those on planes (not even in hold baggage). I stick to bailers - plastic milk cartons with the bottom cut off and one per seat.

However, if you want a pump, this is the only one I have found that is powered by ordinary batteries.


How much food were you able to buy locally and what options did you find?

Like I said, I don't recommend this. The organisers usually give you some bottles of Powerade, but it’s not enough for the whole race. Take empty bottles and powders.

How much food did you take from the UK?

All of it. See above.

How much/what sort of food do you take on the water?

Enough to eat in each coxing stint, plus the odd bite while someone else is swapping coxing during your 2 hour stints. Personal choice for what to take, really. I find that if I only eat sugary stuff for 14 hours my stomach starts hurting so I need a mix of sweet and savoury but that may just be me. See the Rules of Expedition Rowing for more on this (Rule 1). Take a large lunch box for everyone's food for the coxing seat - this stops it getting trodden on while swapping.


I've read your blogs. Would you still recommend a stroke rate of 24?

Yes. Though I'm slightly worried that you're asking - it feels like you don't like this answer and want a 'better' one that will work just as well. If you aren't good enough at rowing or fit enough to rate 24, your chances of making the cutoff times are fairly slim.

As we are new to endurance, what would be the longest row you would suggest prior to the event?

Doing the Boston Marathon is a good start but a bit like the broken biscuit at the top of the packet been necessary to stop the rest of the biscuits breaking, you'll only really get the hang of it once you've done it. Sorry! See above for advice that you do a MINIMUM 2.5 hour row, swapping.

Can you recommend any rowing gloves that do actually minimise blisters?

Actually the best way to minimise blisters is to row square blades (as a crew) if your technique is good enough and the water's flat enough. But gloves are essential, and it's also important to practice (on a long row) in them to find out how they work for you. It's quite personal. I use kangaroo leather (thin but strong) gloves from Kakadu but the exchange rate against the Australian dollar has made these increasingly expensive and when I bought my most recent pair I was then slapped with a £15 customs fee that I'd not had to pay before, so they're no longer cost-effective.

I use tape too. See the Rules of Expedition Rowing for more on this (Rule 2).


Do you have any tips on the crew changing over for coxing?

Do all boats need the plastic covering with wooden supports? Do we need to take the wood and plastic with us?

So just to confirm, you will be taking pieces of wood in your luggage and there isn’t any at the club in Geneva?

Any top tips with navigation?

Use a GPS. The co-ordinates are here. I never know why the Villeneuve one is Approx – and it’s not quite correct. But Villeneuve is a tiny island you go round so it’s really obvious once you get there – have a look on Google Earth and you’ll see what I mean!

Also, make sure that everyone in the crew understands that the shortest distance between two points is a straight line.


Do you get liability insurance through your rowing club or do it personally?

British Rowing membership gives you cover for events abroad that are affiliated to another national federation.

This includes, but is not limited to, crews I've been in.
By the way, did you get the bit about the trainers?
Posted by Expedition Rower at 13:36