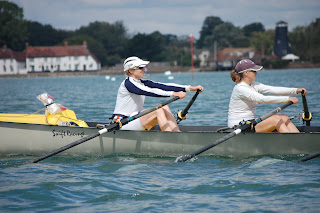 After so many adventures lost the the pandemic, at long last it was time to plan a proper on-water, Jelly Baby-fuelled, Ooievaar-accompanied (more on him later) rowing expedition again.

For maximum joy, I felt this needed fulfill two criteria: first, for it to be a coastal row - that winning combination of rowing and playing by the beach - and second, to be a circumnavigation of an island (enabling a round trip with a clear success criterion). The perfect solution was Mike Gilbert and the Hayling Island-based Coastal Rowing Academy.

Initially, Mike rightly pointed out that there are two particularly tricky pieces of water in the south corners of Hayling Island, which were no place for 'coastal novices', but despite that being a fair description of our rowing CVs, our other credentials got us through his risk assessment, and a plan was hatched. Then we realised that the tides on our chosen date would mean boating at 5.30am, so we ditched it, and rescheduled for a few weeks later. This turned out to be a metorological master stroke as it chucked it down on Plan A day. That said, a week before Plan B day the forecast was looking a bit too breezy, and disappointingly damp. I checked with Mike whether this was the weather he had ordered, and he replied that it wasn't, so he sent that weather back and ordered some that was more suitable - pleasantly warm, no rain, and a 'Goldilocks' wind that made the rowing fun but without actual wave deluges. 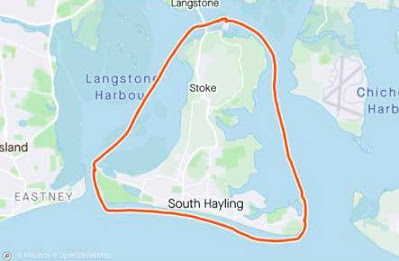 Safety and photography: Mike and Gail of the Coastal Rowing Academy

Almost as soon as we'd set off, we were faced with the only two steering obstacles on the route: the road bridge and the abandoned buttresses of the long-gone Billy Line railway bridge. Mike's invaluable local knowledge advised us that we'd fit through any of the arches in the former, but we'd only get through a kind of reinforced gateway in the latter. 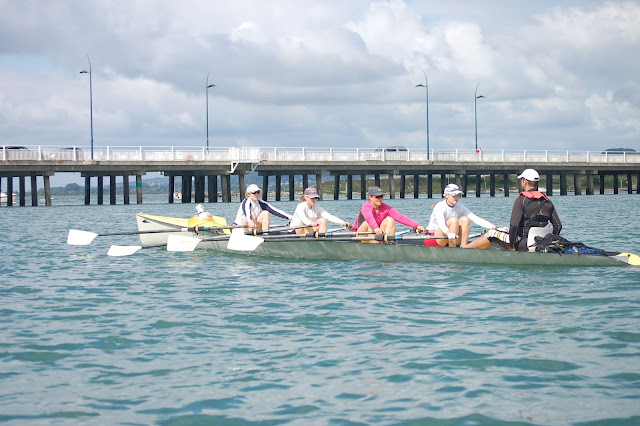 The Billy Line gap turned out to be much more generously proportioned than we'd feared, but it was good Naomi checked, just in case. 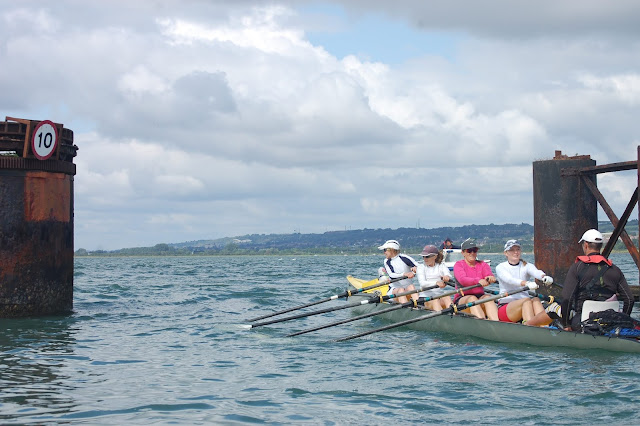 Talking of bows, readers will spot that Naomi was preceded through the gap by Ooievaar the stork, suitably waterproofed and taped on so he wasn't accidentally washed overboard. For readers who aren't familiar with Ooievaar, Sandra, Tricky and I won him at a rowing marathon in the Hague (the city's emblem is an eel-eating stork) in 2017, and he's been making guest appearances at rowing events around Europe ever since. 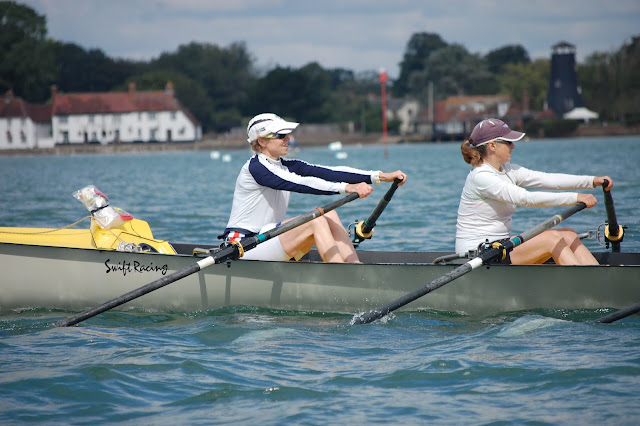 Back to the circumnavigation. Now out the the sheter of the bridge, we turned the corner, and headed down the western side of the sland. There was a stiff-ish north-westerly side-breeze blowing, which gave the water exactly the kind of wrinkles needed to make it clear we weren't just doing an ordinary rover outing in an extra-heavy boat. With the bows bouncing around most, safety-conscious Naomi suggested that seat belts might be a good idea. Afterwards, Mike told us that we might have been better off eschewing our river-typical 'lightweights in the bows' crew order and put some of our heavier members there, to keep the front of the boat cutting through the waves rather than over it. One to remember for next time (more on that in due course).

There were sights to see all over the place; nice white chalk cliffs behind us, the top of the Spinnaker Tower in Portsmouth over to our bowside, and then a close pass on a chunk of the concrete D-Day Landings Mulberry Harbour.

All too soon, we were at the  bottom of the island, where we pulled into a beach (you can see the little nibble in the course on the map) so that I could swap into the coxing seat so we had the strongest crew and most experienced cox for the more challenging conditions along the un-sheltered coast of the island. We were quickly past the first of the tricky bits Mike had warned us about was a shoal area with strong currents - actually quite visible as the sea colour changed - and out into, well, not exactly the open Solent, but some much livelier conditions. 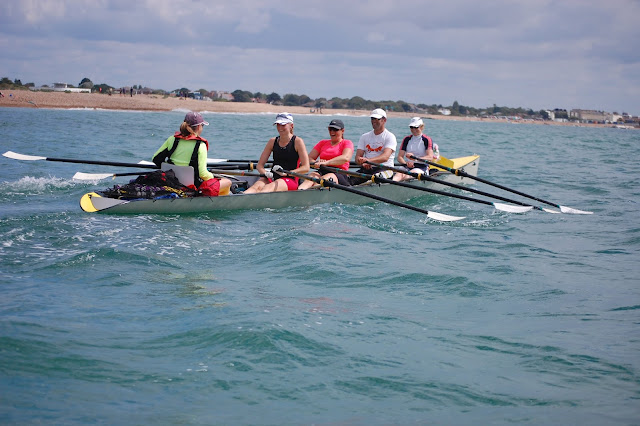 New sights out on the wonderfully sparkly water included breaking waves, coloured beach huts, and lots and LOTS of yachts (probably just dinghies, actually, but that doesn't rhyme). I wondered out loud why they were crowding into the same small patch of the water when there was plenty more to go around; Sandra, who has sailed here for years, explained that it would be because that was where the best wind was. Honestly, life's so much easier propelled by oars.

After rounding the south easter corner of the island we did our final cox swap and passed round Rachael's yoghurt-covered raisins (having misguidedly left the Jelly Babies in a dry bag in the safety boat with Mike), scoffing the lot. It's amazing how hungry sea air makes you.
The final part of the row up from Chichester Harbour was different in character again from the first two sections. The water was much calmer in the shelter of the island, but also massively busier with yachts moored all over the place, motoring in and out and in some cases, sailing with full spinakers, so there was plenty to look at. A highlight was the restored Victorian oyster boat Terror which now provides tourist trips.

The fun ended really rather too soon, after just two hours and 20 minutes on the water (10 of them swapping); it turned out we were the first coxed quad that Mike knew of to have circumnavigated Hayling Island, although there's an annual race for more traditional fixed-seat gigs and cutters. He reckons our time doesn't count even as an unoffical, local record, though, because we got out of the boat to swap coxes (if we'd known, we would have done scrambling changes!), so we'll no doubt be back some time - maybe in next year's race to show those fixed seat crews the many benefits of sliding seats.
All in all, it was a grand day out with our new friend, who made doubly sure that we'd be back by dangling the opportunity of another circumnavigation - the Isle of Wight. Irresistable, and definitely on the list for 2022.
Posted by Expedition Rower at 12:59