Oh I do like to row beside the seaside 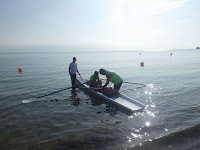 Rowing tourism is definitely a thing. Exploring new and gorgeous scenery while doing the sport you love is a a win-win wherever you are, but if it's at the coast, there's also all the fun of trying a slightly different type of rowing AND soaking up that beach vibe.

And so it was decided (note the careful use of the third person there to disguise the disproportionate say I had in the matter) that my husband and I would have our summer holiday this year in Dorset so we could go rowing at the Coastal Rowing Centre which offers pay-as-you-row sessions starting at Studland Beach.

Whilst we loved it, coastal rowing may (just conceivably) not be for you, so I've drawn up this handy flow chart to help you decide: 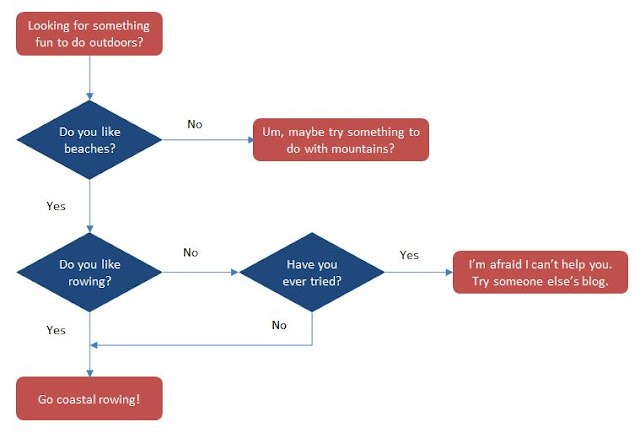 Still reading? Well, you must have reached the "Go coastal rowing!" outcome, so the remainder of this blog will explain about the boats, handling the waves, and what else is different for flat water rowers going coastal, along with a few of what what I appreciate are my holiday snaps.

We used 'FISA-type', offshore (which means onshore if you're a sailor, as opposed to traditional coastal rowing boats which are more designed for estuaries) coastal single sculls made by Liteboat, which cleverly solve one of the main challenges of rowing in rough water - that the boat fills up if a wave breaks into it - by not really being enclosed. Although there's enough of a footwell to keep your water bottle from being washed away, the amount of sea water this contains has no impact on the height that these wide, flat-bottomed boats sit in the water.

The vertical bows serve both to cut through the waves and keep the boat going straight enough that it doesn't need a fin (so there's no angst about knocking this off when you launch or land, or row in shallow water strewn with submerged rocks), which also makes them very manoeuverable; it's practically worth going round twice when you spin just for the roundabout-like ride!

The flat shape of the rest of the hull means that they are incredibly stable; altogether, it's a clever design!

Like many non-fine rowing boats, they have ergo feet in them, and the mistake I made was to wear wetsuit shoes; although these were ideal for the 'wet launch' from the beach, the flat bar at the back of the feet quickly rubbed the skin off my heels through the soft fabric, which was a type of rowing blister I certainly hadn't experienced before. Tip: wear old trainers! 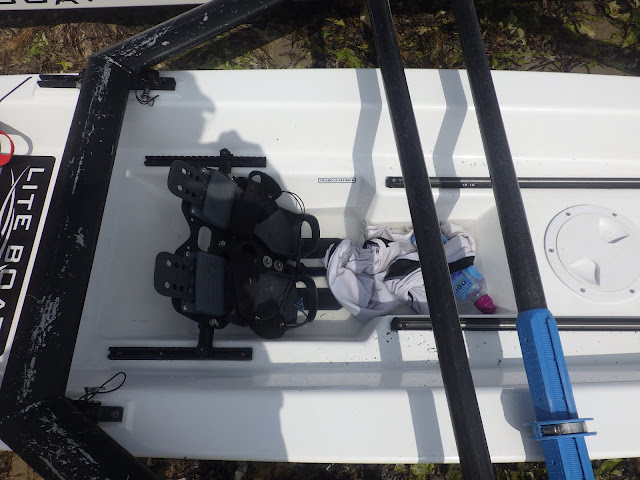 Naturally, we were looking forward to exciting conditions and to learning how to launch and land through the surf and to row and turn in waves. But what we got on the day was a mirror-flat calm, so I can't tell you anything about how to do any of these things from personal experience, although Bob's advice is to keep your upper body and arms loose so you can feel the conditions and react to whatever the water is doing on any particular stroke. 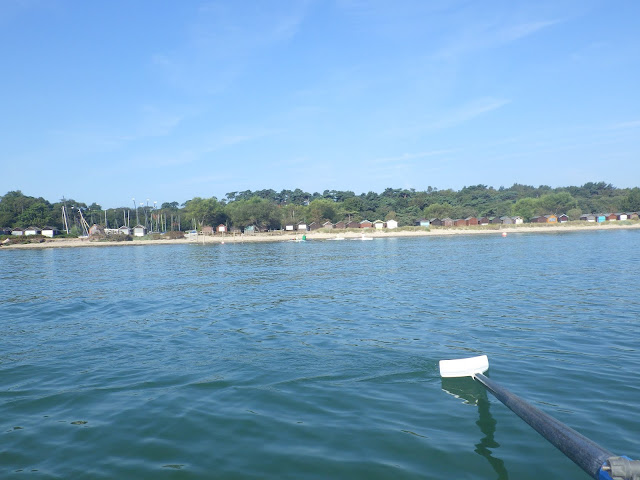 It was easy enough to plan a basic route - in consultation with Bob, we decided to head north along Studland Beach and into Poole Harbour where went round Green Island and Furzey Island (which score much higher on the picturesque scale than they do for imaginative naming being, obviously, green, and covered in furze bushes), two very small islands just south west of the larger and much better known Brownsea Island, famous for its red squirrels and being the birthplace of the Scouting movement (on the rest of our holiday we kept coming across Scout troops hiking towards it on quasi-pilgrimages).

We finished off by going out to Old Harry Rocks on the headland (a wonderful photo opportunity) before returning to Knoll Beach.


All of that looks very easy on the map, but it's really quite tricky to take the stick to the right route in natural expanse of water, islands, promontaries, moored boats and buoys that makes up Poole Harbour. Once we were out on the main coast, it going the right way was a lot easier, so long as you note and use landmarks, and conveniently, the Sandbanks Ferry that runs across the entrance to the harbour had broken down so that was one fewer thing to avoid.

Coastal rowing is growing fast. As the slightly edgy cousin of fine boat racing, rather like snowboarding is to classic downhill, there's even talk that it might replace the current rowing format in the Olympics as many more nations have access to beaches than to the type of lakes and rivers that fine boats train on, plus it's a lot cheaper for a host nation to lay on coastal racing than to build a multi-lane course, and with the unpredictability of the waves thrown in, it's got spectator appeal, especially with the younger audiences the International Olympic Committee is keen to attract.

But zeitgeist or not, it's well worth doing for its own sake so start planning your trip now!

I'll definitely be going again, but next time, bizarrely, I'll be hoping for a slightly WORSE weather forecast.

Posted by Expedition Rower at 10:45