The Tale of the Flexy Scullers 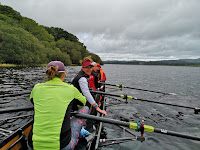 Once upon a time there were five little scullers and their names were Coxy, Hipsy, JV, Mandy and Rachel. They lived in sand banks underneath the roots of very big fir trees (well, something like that) all over the country, but often went rowing together.

One fine day they decided they'd like to go on the British Rowing Tour of the Lake District; that combination of 'Lake District' and 'rowing' being totally irresistible, of course.

Unfortunately, once they got there it was no longer a fine day, even though it was August. "Damn, it's going to be blowing a hoolie," said Rachel, checking the forecast on her phone. And that's exactly what it did.

"Now my dears," said the safety adviser to the 50 or so expectant rowers who had gathered at Derwent Water on the first day, "It's looking a bit rough, so we'd like to send out a sacrificial, I mean, test crew, one-to-one with the safety boat so we can find out if it's rowable."

They took lifejackets, waterproofs, flipflops, waterbottles (yeah, those were useful), bailers and tools and went down the lane to the beachy bit where everyone helped them launch their touring coxed quad in a sheltered bay. The water was lovely and clear, both the stuff in the lake and the stuff coming down from the sky.

Before setting off , Coxy reminded them of the importance of holding on to the boat if it did swamp, and explained that they'd number off from bow once they were in the water if this happened, and how they'd turn it back over again if needed. As she was always in charge, the line of command was built in, and advantage they had over many of the other crews who had not spent decades rowing together.

Once they rowed out of the sheltered bay and round the corner to the top of the lake, it got a bit choppier, but it was still OK. The safety boat came to join them. "Go down the west side," the safety adviser said, adding, "It'll probably get a bit rougher once you're past those little islets about 600m from here."

Off they went, sitting up and bracing their cores, and emphasising the circle at their finishes to get their blades out of trouble. The rowers couldn't see what they were heading to, of course. But Coxy could. "Um, it looks like there's a lie of surf at those islets," she shouted as they headed towards what the French would describe as a flock of sheep (we have 'white horses'm they have 'moutons') whose coats were so white they might have been washed by Mrs Tiggy-Winkle. As the boat's bows passed the islets the water became decidedly corrugated and waves started breaking through the riggers. They stuck with it for a good 15 strokes, just to be certain it was a no-go.

They retreated to the rowable bit, but after a while the safety boat asked them to come back in from the playground. This proved tricky as the wind had freshened even more and they had to head perpendicular into the waves.  Everyone worked hard on staying relaxed in their arms and shoulders so they could feel the water and go with whatever it was doing, and Coxy tried to warn them each time a 'big one' was coming. The hull parried them pretty well, but nothing could stop the waves breaking up through the riggers, and by the time they got back, their footwells had filled up to deck level, and they were as wet as if they'd jumped into a watering can to hire from an irate gardener with a pie-making wife. 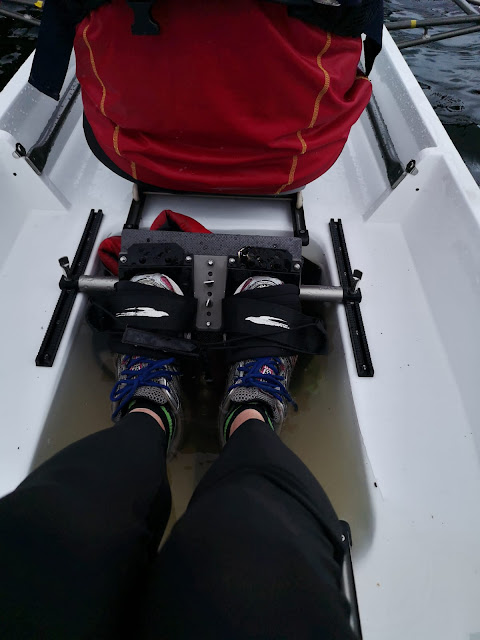 Coxy, Rachel and JV spent the afternoon in the Pencil Museum, which made Coxy happy as she'd been wanting to go there for years. Mandy refused to join them because she was also a fell runner, and that ilk have a saying, "It's not bad enough to need to go to the Pencil Museum." It takes all sorts. Hipsy went to play with her granddaughter. Indoors.

The next day dawned dry and only breezy. They ran (well, drove) straight to Bassenthwaite Lake and squeezed under the gate (again, just go with this).

After baling out all over the boats which were full of leaves, they hopped into theirs and paddled off. Hipsy coxed so Coxy could row. Behind them, Coxy could see Armathwaite Hall which had jolly fine lawns stretching down to the lake shore. They rowed south, but were careful not to go right to the far end of the lake where there's an exclusion zone near osprey nests, so they turned across the lake and came back up the other side. It started to rain, and Hipsy despaired of Rachel (who was the Young Person in the crew) for taking photos instead of numbering off.

Quiet reasonably, Hipsy wanted to do some rowing so JV volunteered to cox for a second circuit of this compact little lake. She had to borrow some waterproofs which might have been a bi big for her. She also borrowed Hipsy's red sou'wester which everyone thought was very natty. 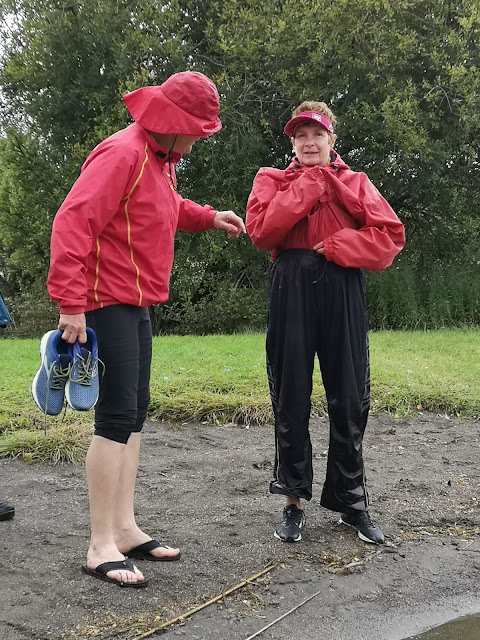 JV made them do exercises and use their glutes properly. It's important to keep standards up.

That afternoon, Hipsy went off to play with her granddaughter again, and Mandy led the others over a stile and up a hill that went up, up to an osprey vantage point where there were telescopes. They watched an osprey having an argument with a crow, and learned that an osprey's nest is the size of a double bed. Not a very well made one, it has to be said. Later they had tea, but brewed from teabags not camomile, nettles or any of the other weird stuff anthrompomorphised little furry animals make it from in he literature. 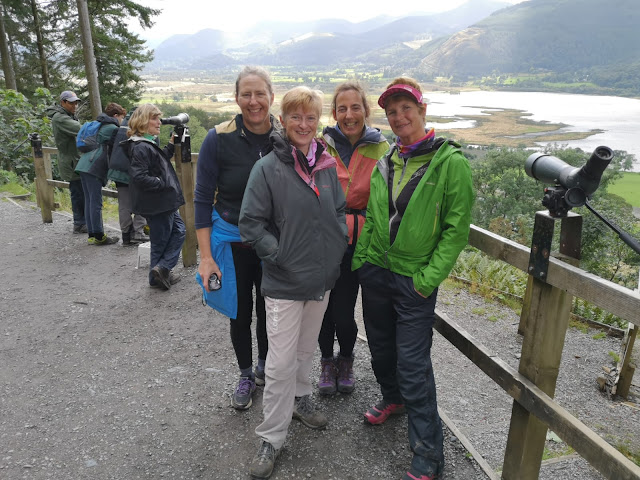 On the last day, they went over the hills and far away to Ullswater, which is a very long lake. It runs kinda south west to north east. The wind was coming from a west-south-west direction, but was only moderate. Well, maybe on the frisky side of moderate. The overall plan was for the 'fleet' of about eight boats to stay together. There was a lot of sense in this, but our fivesome aware that, being quite a lot more experienced (as in, more than 150 years of it between them), and having put in a lot of time refining the art of putting the blades in the water and taking them out again together, never mind rating over 22, their base speed was a little faster than that of some of the other boats, some of which were quite inexperienced, and 'staying together' would require a disappointing amount of stopping.

Politely prompted, the safety advisor proposed a suggestion; if they promised that they were experienced enough at rowing in such conditions and took responsibility for going off on their own they could. Used as they are to rowing on Damflask Reservoir in Sheffield (where the prevailing conditions are best described as 'hostile'), and bad days on the Tideway and far down the Thames estuary at Rochester (never mind the coastal experience that two of them had), they felt justified in promising this, and so off they went, everyone wearing matching UK Gold all in ones that were totally covered up by waterproofs and lifejackets, and very much obliged to the safety adviser's suggestion. 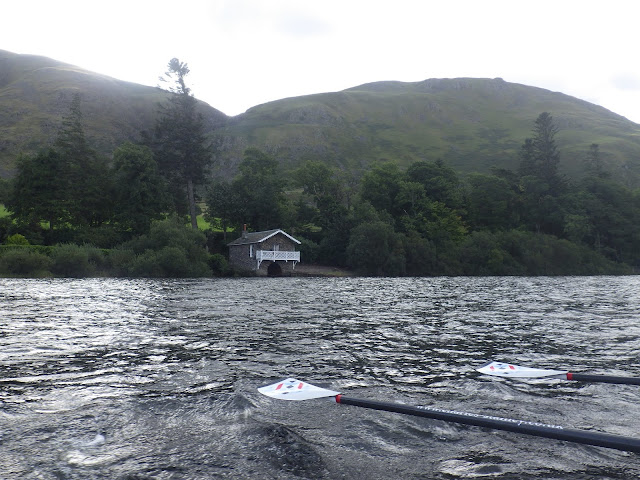 After about 5km, they reached the narrowest part of the lake, where promontaries on either side make a sort of waist. They stopped and discussed whether, given the wind direction, they'd be better off crossing over to the other side of the lake. They agreed that they would be, but once they got there, the wind blew up a lot more, and after another 1km or so, decided that the waves were showing an unhealthy interest in the riggers, and they ought to turn round. This was fine for a bit as they hugged the shoreline heading back up the lake, but the shape of the bank meant that they had to spend about 150m parallel with the waves, which was a touch challenging. The rest of the trip to the head of the lake was idyllic, though, rowing with 360 degrees of hills round the boat, and passing more great vernacular architecture, fleets of moored yachts, and the two sightseeing steamers that plough up and down the lake (both painted a questionable shade of light greeny blue, you know the one).

On returning to their starting point at Ullswater Sailing Club, Hipsy took the ruder strings again so that Coxy could have a row, and they headed back down the southern shore to meet the rest of the fleet who by now were coming towards them, passing some quite fast-moving sailing boats (and a windsurfer with a foil – which shows quite how fast it was moving). They politely rowed past the other crews and turned behind them with the idea that the might only overtake the leading one just as they got back to the club. With a screaming tailwind behind them, though, they passed all of them within a few minutes. Being in time and rating 22 does have a lot going for it, it seems. As a result they got back to the sailing club well before the others and obviously turned into the wind to land on the pebbly shore. Having hoiked their boat out onto the grass, they were alarmed to see several of the other crews attempting to land with the wind, but realised that this was an understandable 'mistake' for folk who have only ever rowed on sheltered canals or rivers and learned which way to land at their club's landing stage by rote rather than understanding why. Rachel explained, while also pulling them in. There really is no substitute for the combination of experience and knowledge.

Later in the clubhouse they were served cups of tea by nice ladies in pinnies, one of whom turned out to have rowed with Mandy years before. Rowers get everywhere.

They also got chatting to another lady who kept her sculling boat at the club and told hem that conditions had only allowed her to take it out four times that year, whereas the scullers at the rowing club on Windermere had got out every weekend since Easter.

So what was the verdict on rowing in the Lake District? In short, it's fabulous, but if you want to be sure to be able to do it, maybe try the southern lakes. And even then, have a Plan B. Up to you whether it involves pencils, though.

Posted by Expedition Rower at 12:46